Fiji's self-appointed prime minister accused New Zealand of hypocrisy Tuesday, saying the sanctions it imposed on his military-led country following a coup will impede its return to democracy. 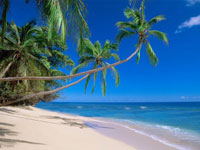 On Monday, New Zealand banned visas for all people appointed to government posts in Fiji since the bloodless coup in December - extending a restriction already preventing entry by coup leaders and their associates.

Prime Minister Helen Clark also said contact between officials from New Zealand and Fiji at international meetings will be further restricted and that military links will remain frozen except for disaster relief assistance.

"If New Zealand's aim is to hurt Fiji and crumble our institutions of state, then obviously it will affect our capability to return the country to parliamentary democracy expeditiously, which the international community is demanding," Bainimarama said in a statement.

The military commander said Fiji's interim government is "firmly committed" to meeting commitments it has made to return Fiji to democracy, uphold the 1997 constitution, end human rights abuses and address allegations of abuse.

Bainimarama said he has made "demonstrable progress" in returning Fiji to democracy, pointing out that military checkpoints and emergency regulations have been removed, troops have returned to their barracks and Fiji has engaged with the South Pacific Forum.

The travel bans are "hypocrisy of the highest order on (the) part of New Zealand," he said.

Fiji's military-led government was "overseeing the militarization of a society as we speak. I have been astonished to seek the extent of militarization across Fiji in the past few months," Clark said Monday.