The leftist who barely lost Mexico's closest presidential election issued a message before followers in Mexico City's main square Sunday, aiming to re-igniting a flagging movement that could split the left. 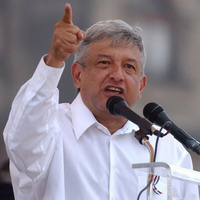 Andres Manuel Lopez Obrador called for "zero negotiation" with Mexican President Felipe Calderon and threatened to rouse the masses if the government tries to privatize the country's state-owned oil industry.

"Zero negotiation. I repeat, zero negotiation" with the government, he told the rally, which was somewhat smaller than the ones he called last year after narrowly losing the July 2, 2006, elections to Calderon, a defeat he blamed on fraud.

Lopez Obrador has refused to recognize Calderon - who won the five-way 2006 election by a margin of less than 1 percent - and has mounted his own parallel "government," with himself as "legitimate president."

He warned of unspecified consequences if Calderon tries to open the oil industry - which suffers from falling production and a lack of investment - to private or foreign interests.

"As soon as such an initiative is sent, I will call you all together for an emergency meeting ... to take such measures as are necessary," he told the cheering crowd, which greeted him with shouts of "President! President!"

Calderon has called for allowing outsiders to enter joint ventures and investments with the Pemex oil monopoly, but has pledged not to privatize it.

Since taking office on Dec. 1, Calderon has earned 65 percent approval ratings with a war on drug trafficking that has sent thousands of soldiers and federal police to combat well-armed cartels.

Lopez Obrador blamed government policies for the flood of Mexican migrants heading to the United States, saying that while migration has existed for many years, it has become more widespread as farm families become more impoverished.

His movement, which draws support from about one-quarter of the population, is keeping alive an undercurrent of skepticism and discontent, though it rarely makes headlines anymore.

"The movement is not dead. What's happening is that the media want to kill it," said Jaime Taylor, 55, a small-business owner who attended the rally.

"We no longer have confidence in any of the country's institutions: not the army, the courts, electoral or human rights authorities," Taylor said. "We only trust the legitimate government ... and that is Lopez Obrador."

Lopez Obrador has been tirelessly touring small towns across the country enrolling supporters as "representatives" of his "government," a backwoods strategy not unlike that followed by many leaders of the 1910-1917 Mexican Revolution, who would disappear into the mountains, only to pop up again when least expected.

"Lopez Obrador may seem to have disappeared, but as soon as he appears in any town square anywhere in the country, people gather and give him the same warm welcome they always have," said writer and Lopez Obrador supporter Guadalupe Loaeza.

At stake Sunday is the leadership of Mexico's left. Marcelo Ebrard, now mayor of Mexico City, is more centrist and considered by many to have a better chance at winning the 2012 presidential elections than Lopez Obrador, who is saddled with an image as a sore loser.

Ebrard was at Sunday's rally and hugged Lopez Obrador, but did not address the crowd.

Even some Lopez Obrador supporters hope the charismatic ex-candidate will not ruin Ebrard's chances by trying to run again in 2012.

"If Ebrard has more support in the polls, I expect Lopez Obrador will recognize that," said Fernando Galicia Villa, 55, a doctor who attended the rally.

Lopez Obrador, however, shows no sign of giving up his one-man campaign. He has a pre-dawn weekly TV program paid for supporters - the unattractive time slot is the only one he can afford - and released a book timed to coincide with the rally, entitled "The Mafia Robbed Us of The Presidency."