A peacock that roamed into a fast-food restaurant parking lot was attacked by a man claiming the bird was a vampire. 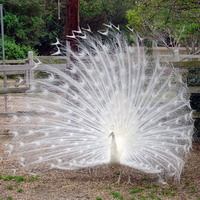 Beaten so fiercely that most of his tail feathers fell out, the bird was euthanized, said Richard Gentles, a spokesman for the city's Center for Animal Care and Control.

"It's just unbelievable that someone would do something to a poor, defenseless animal and do it in such a cruel fashion," he said.

The peacock, a male several years old, wandered into a Burger King parking lot in the Staten Island burrough of New York and perched on a car hood Thursday morning. Employees had been feeding him bread when the man appeared.

He seized the bird by the neck, hurled it to the ground and started kicking and stomping on the creature, said worker Felicia Finnegan, 19.

"He was going crazy," she said.

Asked what he was doing, she said, the attacker explained, "I'm killing a vampire."

Employees called police, but the man ran when he saw them. Authorities were looking for the attacker, described as being in his teens or early 20s.

It was not clear how the bird arrived at the Burger King, but a Staten Island resident who raises peacocks said he had given some to a person who lives near the restaurant.