A concert by South Korean pop star Rain was canceled, disappointing fans who had flown in from as far away as Hong Kong and Tokyo. 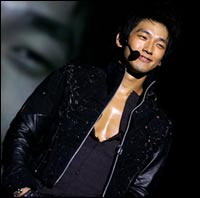 The 25-year-old performer's show requires 28 trucks loaded with stage rigging and a 96-person entourage, the Los Angeles Times reported in an article on Rain published Saturday.

The Staples Center appearance was the final stop listed on the Web site of the "Rain's Coming" world tour that began in December in Seoul, South Korea.

About 80 percent of Saturday night's concert tickets had been sold, some to fans who had flown in from Asia for the show, promoters said. Full ticket refunds would be available beginning Monday, Staples' spokeswoman Cara Vanderhook said.

Nearly 200,000 Koreans live in Los Angeles, according to the U.S. Census, by far the largest grouping of America's estimated 1.2 million Korean immigrants.

Rain, whose real name is Jung Ji-Hoon, is widely popular across Asia for his hip-hop dance moves and sex appeal. He will be appearing in the action adventure film adaptation of the Japanese animated series "Speed Racer" by the Wachowski brothers, who created the "Matrix" movies.