Next shuttle launch to take place in Aug. 7

NASA moved up the next scheduled space shuttle mission by two days to give Endeavour more chances to lift off during a busy month. 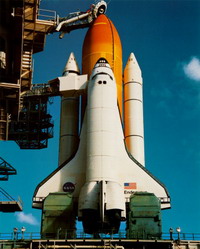 Next shuttle launch to take place in Aug. 7

Mission managers wanted to make sure the shuttle's launch on Aug. 7 did not conflict with the launches of a robotic geologist to Mars and a military communications satellite, both also planned for August.

Technicians at the Kennedy Space Center also have gotten Endeavour ready ahead of schedule for its first flight since late 2002. The shuttle underwent an intensive maintenance overhaul.

"It adds a little flexibility to the schedule," said NASA spokesman Kyle Herring in Houston.

Endeavour will deliver another truss segment to the international space station. The seven-member crew includes Barbara Morgan, who was selected with Christa McAuliffe more than two decades ago for NASA's Teacher in Space project.

Morgan, 55, will be flying for the first time. She was a backup to McAuliffe, who died in the Challenger accident in 1986.

Endeavour's flight will be the second space shuttle mission of the year. Atlantis landed last week at Edwards Air Force Base in California and is scheduled to return to Kennedy on Friday.