Venezuelan president: Russia must revere and revive the ideas of Lenin 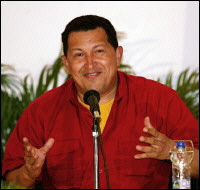 Venezuelan president: Russia must revere and revive the ideas of Lenin

Venezuelan President Hugo Chavez on Thursday told Russians they should revere and revive the ideas of the Soviet Union's founder Vladimir Lenin.

"We should remember Vladimir Lenin and come back to his ideas, especially when it comes to anti-imperialism," Chavez told the audience at the opening of a Moscow cultural center named for the South American revolutionary hero Simon Bolivar.

The rhetoric was vintage Chavez - mainly aimed at portraying Venezuela as a bastion of defiance of the United States. Chavez's comments emphasized Venezuela's solidarity with the Kremlin leadership, which frequently complains of Washington's alleged dominance of global affairs.

Both Russia and Venezuela "stand for the formation of democratic, multipolar world-building," a Kremlin official said on customary condition of anonymity before Chavez's meeting with President Vladimir Putin.

Despite that common stance, Chavez's visit to Russia is low-key in comparison to previous visits. His meeting with Putin will only be an informal dinner.

Meanwhile, the Duma, the lower house of parliament, unexpectedly denied Chavez permission to address a plenary session - limiting him to a chat with parliament leaders in a smaller room.

The Duma is dominated by United Russia, the party that serves as the chief vehicle for Putin's programs.

The move to deny Chavez the chance to present a formal speech to lawmakers was widely seen as a Kremlin move to keep a tight leash on the exuberant and unpredictable Venezuelan populist in the days leading up to a summit between Putin and U.S. President George W. Bush.

"It appears the Kremlin doesn't want to irritate the White House on the eve of the Kennebunkport meeting," the newspaper Kommersant observed Thursday.

Putin and Bush meet Sunday and Monday at the Bush family compound in Kennebunkport, Maine, in a summit seen as a last chance for the two leaders to mend frayed U.S.-Russian relations before Putin's term expires next spring.

After Russia, Chavez travels to Tehran for talks aimed at further deepening ties with Iran, one of Venezuela's closest allies outside Latin America.

Venezuela's close relations with Iran irritate the United States, and the aggravation could be increased by Chavez's assertion that Venezuela would consider developing a nuclear energy program: "Maybe one day we will go in that direction."

The United States contends that Iran's nuclear program, centered on a Russian-built nuclear power station, is aimed at providing cover for development of atomic weapons.

Kremlin officials said Putin and Chavez would mainly discuss expanded economic cooperation and trade ties, but there was a lot of speculation that a major weapons deal was imminent.

Chavez has expressed interest in purchasing Russian submarines, despite likely criticism from the United States, which has voiced concern about Venezuela's military spending.

Caracas has already purchased some US$3 billion (EUR2.25 billion) worth of arms from Russia, including 53 military helicopters, 100,000 Kalashnikov rifles, 24 SU-30 Sukhoi fighter jets and other weapons.

Kommersant reported earlier this month that Chavez was expected to sign an initial contract that would include five Project 636 Kilo-class diesel submarines, and possibly four state-of-the-art Project 677 Amur submarines later.

Chavez on Friday is to travel to Belarus for meetings and possible talks about an air defense system equipped with radar and anti-aircraft missiles. The former paratrooper commander said this week that Venezuela's current short-range system was insufficient.