Israeli troops imposed a curfew on downtown Nablus and clashed with Fatah militants as the army's activities moved Thursday from Gaza to the West Bank. 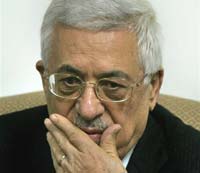 The Nablus raid, which Palestinian witnesses said was the largest in several months, was an indication that Israel will not stop fighting militants linked to President Mahmoud Abbas' Fatah movement - even though Israel is supporting Abbas in his struggle against Hamas, the Islamic group that seized control of the Gaza Strip two weeks ago.

Five Israeli soldiers were wounded by bombs set off by Fatah militants overnight in the old, densely populated part of Nablus known as the casbah, as troops combed alleyways and entered houses searching for gunmen and weapons. One Fatah man was arrested, the army said.

In what has become a routine procedure, the army interrupted broadcasts on the city's radio and TV stations, and Nablus residents heard instead warnings in Arabic not to leave their homes.

The swift victory of Hamas forces over Fatah in Gaza has left the Palestinians divided into two political entities: the West Bank, governed by Fatah, and Hamas-controlled Gaza.

This week, Abbas announced that he would disarm all militants in the West Bank, even Fatah gunmen who nominally owe him allegiance - the same ones battling the Israelis in Nablus. But it was unclear how the weakened Abbas would enforce the order. In one possible indication of its likely fate, a Fatah militant in the West Bank town of Jenin told The Associated Press that while he supported Abbas' decree, his men would not lay down their arms because they were needed to fight Israel.

The Nablus operation began late Wednesday, as two fiercely resisted incursions into Gaza were ending. In those operations, Israeli forces killed 11 Palestinians, including a 12-year-old boy, in the bloodiest fighting since the Hamas takeover. The dead also included eight gunmen. Hospital officials said 47 people were wounded.

The army said troops scoured areas near the Gaza-Israel border for gunmen, weapons and tunnels that could be used to attack Israeli positions, detaining several dozen Palestinians for questioning.

Hamas, now the sole ruler in Gaza, has reduced its attacks on Israel since its lightning 5-day rout of its Fatah rivals in mid-June, and the smaller Islamic Jihad group has taken the lead.

Most of the dozens of rockets fired at Israel's southern towns in recent weeks were launched by Islamic Jihad, which has also taken to shelling border crossings used to send humanitarian aid from Israel into Gaza.

The internationally isolated Hamas government appealed this week for a halt to attacks on the crossings, calling them Gaza's "lifeline." Kevin Kennedy, the U.N. humanitarian coordinator, said an attack Wednesday blocked a planned shipment of 5,000 tons of flour into Gaza.

Gaza has enough flour for only nine days, Kennedy said, and also faces shortages of sugar, milk and meat.