Private brokers licensed by the government to clear commercial imports took part in a scheme to flood the U.S. market with fake Nike sneakers, Rolex watches and other Chinese-made counterfeit products. 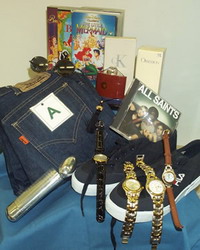 The brokers were named in criminal complaints charging 29 people with conspiring to smuggle more than 950 shipments of high-quality knockoffs through New York City, Long Beach, California, Texas and other ports of entry. In New York, the items were hidden in warehouses in Brooklyn and Queens before being sold to tourists in Chinatown and other parts of Manhattan.

The goods - including fake Ray-Ban sunglasses, Coach handbags and North Face jackets - would have been worth about $700 million (520 million EUR) if authentic. Authorities say such schemes divert income from legitimate manufacturers while cheating the government out of tax revenue.

Federal agents picked up most of the suspects Tuesday morning at their homes - including some multimillion-dollar houses on Long Island.

The suspects were to be arraigned in federal court in Brooklyn.

Officials said it was one of the largest plots in recent history involving corrupt customs brokers. The government licenses the brokers to inspect paperwork provided by importers and to clear merchandise for delivery to wholesalers.

The brokers "were deeply involved and engaged in these activities," said Kevin Delli-Colli, acting head of the Immigration and Customs Enforcement New York office.

Also charged were shippers and warehouse owners. When customs agents arrived for an inspection at one warehouse, the manager concealed the counterfeit goods by substituting them with legitimate merchandise, court papers said.

Some shipments arrived in California with paperwork saying they were destined for Mexico. Instead, they were secretly diverted to a warehouse in Laredo, Texas, the documents said.