The Carnegie Corporation of New York received a $30 million (22.29 million EUR) gift from an anonymous donor who has contributed more than $115 million (85.44 million EUR) to the grantmaking foundation over the years. 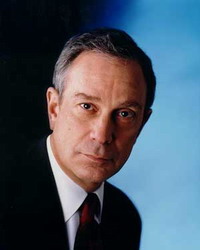 The donor is widely known to be New York Mayor Michael Bloomberg, who makes a gift to Carnegie each year. He gave $30 million last year and $20 million the year before, allowing Carnegie to dole out those millions to hundreds of New York groups.

This year, more than 500 local arts, cultural and social service groups will benefit from the donation, in accordance with the donor's wishes, the Carnegie Corporation said.

"These organizations extend their reach into our city's local communities throughout the five boroughs, nourishing both the city's artists and its cultural life, and helping to meet the myriad social needs of millions of New Yorkers," the foundation said.

A person familiar with Bloomberg's philanthropy confirmed his latest Carnegie gift on condition of anonymity, citing the mayor's desire for privacy.

The billionaire mayor gives away millions of dollars each year, and does so ostensibly in secret. He believes this allows him to maintain a policy that he does not discuss his private life outside City Hall.

The mayor's spokesman, Stu Loeser, declined Tuesday to comment on his private giving.

Bloomberg does divulge some of his gifts publicly, like the $15 million (11.14 million EUR) he gave to build the World Trade Center memorial, since he chairs the foundation and is heading the campaign to raise $350 million (260.03 million EUR) for the project.

He has also publicized the $125 million (92.87 million EUR) he is using to fund a worldwide campaign against smoking, a cause that he believes is too often ignored by philanthropists. The money will be used for international programs that help smokers quit and to promote smoking bans and higher tobacco taxes in other cities and countries, among other initiatives.

Bloomberg has said repeatedly that he plans to tend to his philanthropy full time after leaving office at the end of 2009, and will not spend some of his fortune on a presidential campaign, as many have speculated.

He has begun to assemble a staff to run his charitable giving, and has named it the Bloomberg Family Foundation.

The mayor has declined to say how much money the foundation will give away, but his past donations total hundreds of millions of dollars. His fortune has been estimated at more than $5 billion (3.71 billion EUR).

Beneficiaries of his latest$30 million (22.29 million EUR) gift to Carnegie include a city food bank, a children's theater, an arts education group for the blind and an organization that teaches inmates to train dogs to become service animals.