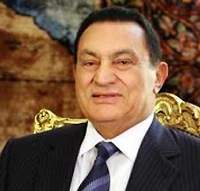 Palestinian President Mahmoud Abbas dissolved the Hamas government after the group took over Gaza in clashes two weeks ago, and has set up a Fatah emergency government in the West Bank.

Mubarak and other Arab leaders have largely thrown their support behind Abbas, and the Egyptian president reiterated Tuesday his criticism of Hamas for the surge of violence that led to the group's takeover of Gaza.

"Frankly, the whole thing was started by Hamas, they lost control and then it swept all of Gaza," Mubarak said in an interview with Egypt's state television.

He said Hamas had made "a dangerous mistake" by letting "chaos prevail."

"Fatah has also committed mistakes, but it is clear that Hamas started the whole thing and confused the world," said Mubarak, a key U.S. ally and a regional heavyweight who is bent on promoting Middle East peace.

Mubarak said Egypt would not ostracize Hamas and would continue to seek a Palestinian reconciliation.

"We receive all (Palestinian) parties," said Mubarak. He said Egyptian intelligence services had frequently met with Hamas and other radical militants like the Islamic Jihad to ease off internal tensions.

Abbas has categorically refused to negotiate with Hamas since the Gaza takeover, but Mubarak said he expected the Palestinian president to resume talks once tensions had cooled off.

He said it was understandable that Abbas was angry after the alleged assassination attempt against him earlier this month.

"It needs time ... for logic and wisdom to prevail," Mubarak said. "Then talks will be possible."

The Egyptian leader also ruled out speculations that Israel's new Defense Minister, Ehud Barak, was considering a reoccupation of the Gaza Strip.

"Storming Gaza? ... it will further complicate the world and I don't think that Barak thinks in this way," he said.