President Evo Morales plans to visit Iran and Russia to drum up investment in the Bolivia's natural gas industry, the government said Monday. 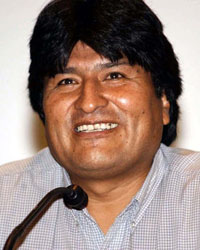 Tentatively scheduled for August, the trip could also include stops in Libya, Angola, and Qatar, according to Hydrocarbons Minister Carlos Villegas.

The tour will seek "strategic partnerships between (state energy company) Yacimientos Petroliferos Fiscales Bolivianos and the state petroleum companies of these gas-producing nations," Villegas said, according a the government news release.

Bolivia has the second largest natural gas reserves in South America after Venezuela but depends heavily on foreign investment to drive the industry.

Morales' oil and gas nationalization last year allowed foreign energy companies to remain in Bolivia after agreeing to give a higher share of their revenues to the government and turn over majority control of their Bolivian operations to the state. But industry analysts fear the nationalization may have frightened off future foreign investment.

A May 13 decree by Morales gave YPFB the power to sign contracts with fellow state petroleum companies such as Russia's Gazprom and the National Iranian Gas Company, as long as the Bolivian company retains majority share in any new project.

Plans for Morales' trip were announced as his close ally Venezuelan President Hugo Chavez prepares for his own tour this week of Russia, Iran and Belarus, where he will consider purchasing arms, including a missile-equipped air defense system.