Accused of killing wife and three children is on trial

A man accused of killing his wife and three children in the family vehicle and shooting himself to cover up the crime was ordered held without bond Monday. 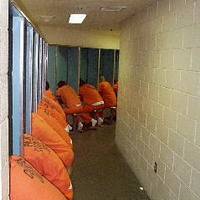 Accused of killing wife and three children is on trial

Chistopher Vaughn, 32, was arrested Saturday at funeral home just hours before a memorial service for his wife and three children, who ranged in age from 8 to 12.

The four were found shot to death June 14 in their parked sport utility vehicle about 40 miles (64 kilometers) southwest of Chicago after a wounded Vaughn flagged down a motorist for help. Authorities claim Vaughn shot himself in the thigh after the killings.

Vaughn, a computer security consultant, had superficial gunshot wounds in the leg and arm, and his handgun was found at the scene, authorities said. His wife, Kimberly, was shot once and the children each were shot twice, authorities said.

Vaughn must be extradited to Illinois to face murder charges; Monday's hearing concerned only an out-of-state fugitive charge.

Before he was arrested, Vaughn had voluntarily met with investigators three times to answer questions. Authorities would not say what evidence allowed them to seek a a warrant for his arrest.

On Monday afternoon, Illinois Governor Rod Blagojevich signed an extradition order for Vaughn, and Jessica Robinson, a spokeswoman for Missouri Governor Matt Blunt, said Blunt would "expeditiously" review the order once he received it.

"We are hopeful in the very near future that he could be delivered here to the Will County Jail to start the prosecution," Will County State's Attorney James Glasgow said Monday. He said Vaughn could be returned as early as Tuesday.

Vaughn's extradition attorney, David Waltrip, said his client intends to plead not guilty to the fugitive count and challenge extradition.

Vaughn's next court date is scheduled for July 25.