Attempted murder and conspiracy charges against a black high school student blamed for beating of a white student were reduced Monday in a case that began with white students hanging nooses from a tree. 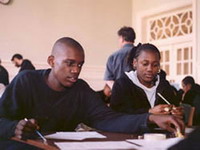 Mychale Bell is one of six black Jena High School students charged in the December beating, which has drawn criticism from residents who say the charges are far too serious for the crime and are the result of racism.

Bell still faces trial Tuesday, but if convicted he would serve a maximum of 22 years in prison instead of 80.

Prosecutors have refused to discuss details of the case.

"I think he feels a lot better since they lowered the charges. At least that's a good first step," Bell's mother, Melissa Bell, said after Monday's hearing.

Another suspect, Theodore Shaw, also had been scheduled for trial this week, but his case was delayed. Trial dates for the others - Robert Bailey Jr., Bryant Purvis, Carwin Jones and another unidentified juvenile - had not been set.

Last August, a black student at Jena High School was told by the school principal he could sit in the school courtyard under a tree traditionally used by white students.

The next morning, three nooses were hanging in the tree.

"It meant a lynching," said Caseptla Bailey, Bailey's mother. "Everyone knew what it meant."

The principal recommended expulsion for the three students who hung the nooses, but they served a suspension instead.

"That just set all the black kids off," said John Jenkins, Jones' father. "Wasn't that a hate crime? If anyone was going to be charged, shouldn't they have been?"

The racial tension led to a series of fights between white and black students, Bailey and Jenkins said.

On Dec. 4, Justin Barker, who is white, was attacked at school by a small group of black students.

District attorney Walter Reed and school officials did not return calls for comment. Jena, a town of 2,900, has about 350 black residents.

"This is a good town to live in for things like no crime, it being peaceful," Bailey said. "But it's very racist and they don't even try to hide it. It's like, stay in your place or else."