The effort to convince Al Gore to run for president is reaching the airwaves in Iowa. 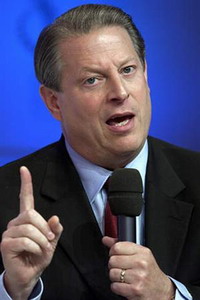 The Draft Gore Committee launched its first radio ad on Monday on WHO-AM radio in Des Moines. The 30-second ad, dubbed "You Who," features a chorus of voices urging the former vice president and Oscar winner for his global warming documentary "An Inconvenient Truth," to seek the Democratic presidential nomination.

The political action committee, which claims to have gathered 94,000 signatures on an online petition, is not officially affiliated with Gore. The 2000 Democratic nominee has repeatedly said he has no plans to seek the nomination, though he has not ruled out a bid.

The radio ad included such pleas as "Mr. Gore we need you for president," and "We deserve a president we can respect."