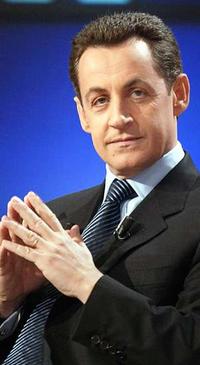 French President Nicolas Sarkozy hopes that the U.S. will take the leading role in fighting global warming and urged unity at the U.N. over Iran's nuclear program in talks with Condoleezza Rice Monday.

In their first meetings since Sarkozy took over from Jacques Chirac, the new conservative French president appeared eager to work with Washington but also to defend France's role in world affairs.

Rice was in Paris for talks on the future of Sudan's ravaged Darfur region and a meeting with Lebanon's Western-backed premier. Her two-day Paris trip is a coming-out party for what the Bush administration hopes will be a happier relationship with Sarkozy than with Chirac.

In discussions about Iran, Sarkozy told Rice "that the Security Council should be united in a position of firmness and in the search for a diplomatic solution," Sarkozy spokesman David Martinon said after the meeting.

The two also spoke about the prickly subject of climate change. Sarkozy stressed his hope that "the United States will be the leading figure in the fight against global warming," Martinon said. The United States has come under criticism for refusing to ratify the Kyoto Protocol global environmental pact aimed at reducing greenhouse gas emissions.

In talks about Afghanistan, Sarkozy remained vague about the future of France's deployment. He suggested during the presidential campaign that France could pull out troops. On Monday, he "confirmed to Rice our involvement on the ground, while inviting reflection on our long-term strategy," Martinon said, without elaborating.

They also discussed tensions in Lebanon and in the Palestinian territories.

Nearly a year after she was ridiculed for calling a war in Lebanon "the birth pangs of a new Middle East," Rice is insisting democracy will come to the region whatever the setbacks.

On Sunday, she acknowledged the bad news coming from Iraq, Lebanon and the Palestinian territories.

"Democracy is hard, and I see it as especially hard when there are determined enemies who try and strangle it," Rice said when asked about the "birth pangs" remark during a news conference with French Foreign Minister Bernard Kouchner.

It will be the first meeting between Abbas and Israeli Prime Minister Ehud Olmert since Abbas lost control to Hamas in the Gaza Strip and consolidated power under an emergency government in the West Bank.