Pakistan's suspended chief justice told thousands of supporters Sunday that their campaign will give "rebirth" to a country that has seen eight years of military rule. 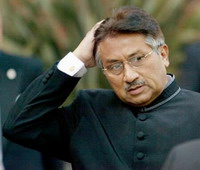 In the latest in a series of rallies, Chaudhry addressed some 12,000 lawyers and opposition activists in the eastern city of Multan after a 36-hour road trip that saw him showered with rose petals in towns and villages along the route.

He did not mention his confrontation with Musharraf directly and appeared to signal to demonstrators to stop chanting "Go, Musharraf, go!" Instead, he hailed them for defending the constitution and the independence of the judiciary.

"The courage of individuals, commitment to an objective and sincere sacrifices can take a nation to the heights of greatness," Chaudhry said.

Musharraf suspended Chaudhry and ordered him to face an investigation by a judicial tribunal on charges including fraud and nepotism.

But critics view the move as an attempt to tame the judiciary in an election year when opponents are expected to challenge Musharraf's continued rule in the courts.

Chaudhry denies any wrongdoing and has appealed to the Supreme Court against his suspension. A verdict is expected next month, and defeat for Musharraf could hasten a return to full civilian rule.

Musharraf seized power in a bloodless coup in 1999 and pledged to restore democracy. He has granted unprecedented media freedoms and presided over a booming economy.

But he has resisted giving up his role as army chief - the real source of his power - and critics accuse the government of authoritarianism for their respose to the current crisis.

Security forces failed to prevent a clash between Chaudhry supporters and members of a party in Musharraf's governing coalition that killed more than 40 people at an aborted rally protesting the chief justice's ouster in the southern city of Karachi in May.

The government has also pressured television channels to tone down their coverage of the crisis.

Musharraf's declared plan is to ask lawmakers this fall for a new five-year mandate. There is speculation that he could strike a power-sharing deal with former Prime Minister Benazir Bhutto, leader of Pakistan's biggest opposition party.

But Bhutto, who wishes to return from exile, insists that Musharraf should seek endorsement from new assemblies resulting from general elections due at the end of the year and that he doff his uniform.

The United States, which relies heavily on Pakistan's security forces for help against al-Qaida and for the war in neighboring Afghanistan, continues to back Musharraf.