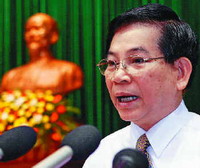 In an interview broadcast Sunday on CNN's "Late Edition," Triet said that the war with the United States was a struggle for liberation fought to regain the human rights of the Vietnamese people.

"Many of us were arrested, put into prison, tortured," he said through a translator. "And therefore, more than anybody else, we love human rights. We respect them."

The interview was recorded Friday in Washington on the day that Triet became the first president from the communist-led nation to visit the White House since the Vietnam War ended in 1975.

Bush said he pressed Triet during their meeting on the importance of having a strong commitment to human rights and democracy.

"I think the United States and Vietnam, different histories, have different legal systems and that's why it's natural that we have certain different perceptions on different things," Triet told CNN.

Vietnam tolerates no challenges to Communist one-party rule; it insists, however, that only lawbreakers are jailed. In recent months, Vietnam has arrested or sentenced at least eight pro-democracy activists, including a dissident Roman Catholic priest who was sentenced to eight years in prison.

Triet acknowledged that his visit to the United States was protested by some Vietnamese-Americans.