A cab driver lays on the horn as he struggles through rush-hour traffic. A few blocks away, sirens blare as an ambulance races down the street. In the subway below, trains screech to a halt and an amateur dance troupe blasts hip-hop music on the platform. 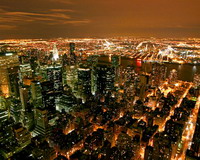 New York can be earsplitting.

But city officials say New York City is about to get a little quieter when new regulations governing jackhammers, barking dogs, barroom music and other auditory menaces take effect July 1.

Even Mister Softee will have to keep it down: The ice-cream chain must now stop playing its maddening jingle - the tinkling tune that gets stuck in your head - when the trucks are stopped in residential areas.

The new regulations represent the first revisions in the city's noise code in more than three decades.

Some New Yorkers are wondering whether the City That Never Sleeps can change its ways.

"Last time I checked, this is New York," said Erik Foss, owner of a bar and gallery called Lit in Manhattan's East Village. "I don't know how you make it quiet around here. It wouldn't be New York if it were silent."

Noise-related calls to the city's hot line have been increasing steadily the past few years and are the top complaint. There were 38,660 noise complaints in 2005, and 41,856 in 2006. The main gripes during the day were construction. Barking dogs and loud air conditioners topped the list in later hours.

This past Saturday and Sunday, the hot line received 4,942 calls about noise - a weekend record.

"Noise is so pervasive in the city that people don't even realize it's happening," said Robyn Gershon, a Columbia University expert on occupational health and safety. "But it affects your health. It has a cardiovascular impact, causes sleep deprivation. Plus, you can go deaf."

The Environmental Protection Agency says people should not be consistently exposed to more than 75 decibels. Heavy city traffic is regularly 85, an ambulance siren is 120, and the subway averages in the 90s.

The old code relied on a way of measuring noise that was generally considered too subjective. Essentially, an officer could issue a ticket if the noise was unreasonable to a person of "normal sensibility."

Under the new code, a bar or club can be ticketed if music is "plainly audible" to a cop or enforcement agent 15 feet (4.6 meters) outside the establishment.

"I think it allows the nightclub to continue to be a great place to hear good music. It's just, the music has to stay in the club," said Emily Lloyd, city commissioner of environmental protection.

Most police precincts have devices to measure noise, but officers often lack the time to calibrate the equipment. If a noise complaint is persistent, Department of Environmental Protection officials will take decibel readings with a device that also measures bass tones, the wall-thumping sounds that bug a lot of sleeping New Yorkers.

Foss, the bar owner, said he already uses soundproof curtains and a new sound system designed so that DJs cannot turn up the volume past a certain level. And since he owns the building, he gives upstairs renters a discount.

Loren Riegelhaupt, spokesman for Forest City Ratner Cos., the developer behind a huge Brooklyn project that will include a new arena for the NBA's Nets, said keeping the noise down is good business.

"We'll do everything we're asked to do," he said. As part of the Brooklyn project, the company is buying double-pane windows and quiet air conditioners for about 700 neighbors.

As for bothersome dogs, under the old code owners could be hit with a violation if the barking was "unreasonable." The new code says an owner can be fined $75 (55 EUR) to $175 (130 EUR) for a first offense if a dog barks for more than 10 minutes during the day, or more than five minutes at night.