Damien Hirst's masterpieces are most expensive in world

A stainless steel cabinet containing 6,136 handcrafted and painted pills has set a record for the highest price paid at auction for a work by living artist. 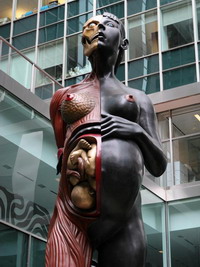 Damien Hirst's masterpieces are most expensive in world

A leading member of the so-called Young British Artists, a group which dominated the British art scene in the 1990s, Hirst is best known for his work involving slicing up and pickling animals and fish in formaldehyde.

His works have consistently attracted controversy - and huge sums of cash.

One of them, a 14-foot (4.26 meter) tiger shark immersed in an aquarium filled with formaldehyde, was among a collection of British works criticized by then-New York City Mayor Rudolph Giuliani when it was displayed at the Brooklyn Museum of Art in 1999.

Giuliani tried, unsuccessfully, to cut funding for the museum over its inclusion of a painting of the Virgin Mary on a canvas spattered with elephant dung.

But the publicity did not hurt Hirst, whose shark was later snapped up by an American collector for US$8 million.

Earlier this month the artist unveiled a platinum cast of a human skull encrusted with over 8,000 diamonds at the opening of his latest exhibition at London's two White Cube galleries.

The glittering skull was valued at about 12 million pounds (US$24 million; 18 million EUR).