U.S. envoy Christopher Hill wrapped up a surprise trip to North Korea on Friday, expressing satisfaction about his talks with officials on pushing forward international efforts to halt the country's nuclear program. 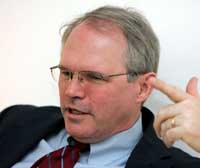 Hill, an assistant secretary of state, arrived in Pyongyang on Thursday in the highest-level U.S. visit to the North Korean capital in more than four years. He is chief envoy to six-party talks involving North and South Korea, China, Japan, Russia and the U.S. aimed at securing North Korea's denuclearization in exchange for economic and energy aid for the impoverished state.

"We had a good discussion about the way forward at the six-party talks," Hill said in footage shot by APTN in Pyongyang before his departure. He also said there were discussions on "the need to move forward."

Hill was seen off at the airport by Ri Gun, director-general of the Foreign Ministry's American affairs bureau and as well as deputy nuclear negotiator.

Hill's visit came amid hopes North Korea was on the verge of taking concrete steps to carry out its commitment to shut down its bomb-making nuclear reactor as pledged under a February agreement. The North carried out its first nuclear test explosion in October last year.

The visit, coming before North Korea makes good on those promises, appeared to demonstrate how much the U.S. wants to achieve a breakthrough in efforts to dismantle Pyongyang's atomic weapons program.

The administration of U.S. President George W. Bush has in the past preferred to meet the North with regional powers like China and Japan at the talks. But the U.S. has been moving away from that limitation, holding meetings on the sidelines of summits and sending White House adviser Victor Cha to Pyongyang earlier this year. Hill's trip is the clearest indication yet of a more direct approach.

The U.S. and North Korea have been at odds since the 1950-53 Korean War and do not have formal diplomatic relations.

The official Korean Central News Agency reported Hill's arrival in a terse, one-line dispatch on Thursday. State television has yet to mention the visit.

The Chosun Sinbo, a pro-North Korean newspaper in Tokyo, reported from Pyongyang that Hill said he hopes to resume the six-party talks after the initial measures mentioned in the Feb. 13 agreement are implemented, and that he was waiting for host China to propose a date.

Hill also expressed hope for a complete implementation of a September 2005 agreement in which North Korea agreed to abandon its nuclear program in exchange for political concessions and economic aid, the paper said Friday.

In February, North Korea committed itself to shut down its main nuclear fuel processing facility at Yongbyon by mid-April after the U.S. promised to free US$25 million (euro18.7 million) in allegedly illicit North Korean funds.

Enough progress had been made by Saturday for North Korean state media to announce that the country had invited the U.N. nuclear watchdog agency to send inspectors for a visit next week to discuss details of the reactor shutdown.

Despite promises by North Korea, the six-party process, which began in August 2003, has failed to achieve any concrete action by the country toward denuclearization.

Hill said this week that he hoped the six-nation talks could reconvene sometime after July 4.

Separately, South Korean Foreign Minister Song Min-soon plans to visit Washington next week for talks with U.S. Secretary of State Condoleezza Rice to discuss the nuclear issue, his ministry said. Their meeting is set for Thursday, it said.