The House of Representatives was casting a vote Thursday when it decides whether to reverse U.S. policy and provide contraceptive grants to groups overseas. 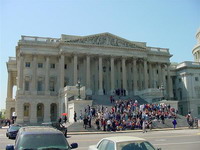 The legislation states the United States cannot deny grants to any group so long as the assistance includes funding for contraceptives. President George W. Bush has threatened to veto the measure, and Republicans say they have enough support to uphold the veto.

In the face of stiff opposition to the plan, Democrats drafted an amendment that would restrict the aid to U.S.-donated contraceptives.

The bill would help "reduce unintended and high-risk pregnancies, and abortions ... and save the lives of mothers," said Rep. Nita Lowey, the Democrat who chairs the House appropriations panel that oversees the foreign aid budget.

"I'm seriously concerned about the ramifications that such a policy change would have on our ability to respect the innocence of human life and human rights worldwide," said Rep. Ileana Ros-Lehtinen, the top Republican on the House Foreign Affairs Committee.

Both sides consider the vote to be a crucial step in the abortion debate. U.S. policy, initiated by President Ronald Reagan and reinstated by Bush in March 2001, bars any assistance to organizations abroad that perform or promote abortion as a method of family planning.

Democrats have since contended the policy does nothing to prevent the unwanted pregnancies that lead to abortion. Accordingly, Democrats drafted a provision they said would allow U.S. donations of contraceptives, but no money to any organization, regardless of its position on abortion.

"This provision does not amend any of the provisions in existing law that prohibit assistance for abortion or otherwise restrict family planning funds," Lowey later added.

Despite Lowey's description, the bill is not written that way.

"No contract or grant which includes funding for the provision of contraceptives in developing countries, shall be denied to any non-governmental organization solely on the basis of" Bush's 2001 policy, the bill states.

The measure is attached to a$34.2 billion (25.5 billion EUR) bill that pays for State Department operations and foreign aid in 2008.

The proposal ignited a firestorm of angry protests from conservative Republican congresswomen, who said they would back an amendment to strip the measure from the funding bill. That amendment, offered by Republican Reps. Christopher Smith and Bart Stupak, would reinforce Bush's existing policy.

"It makes sense that if we do not use U.S. taxpayer funds to fund abortions in the United States, we should not use taxpayer dollars to export this procedure to other countries," said Rep. Jean Schmidt, a Republican. "Congress should not ... be entering into the position as being seen exporting abortion all over the world."

"A vote for Lowey's amendment is a good-faith effort to find common ground, while a vote for Smith is an extreme anti-family planning position," Stanley said.

Democrats and supporters of their proposal say the new law would not promote abortion, but correct a shortage in contraceptives available in poor rural areas. According to Population Action International, Ghana has shown increased rates of sexually transmitted infections and abortions since a prominent family planning group in the country was denied U.S. assistance.

The funding bill attracted a slew of other amendments on foreign affairs, including a proposal by Republican Rep. Chris Shays that would give $1 million (750,000 EUR) to the bipartisan Iraq Study Group to conduct another assessment of the war.

The House also was expected to consider a proposal by Ros-Lehtinen that would restrict aid to the United Nations Human Rights Council, as well as the U.N. development program. The proposals are intended as a rebuke of the United Nations for not taking steps to improve oversight or speaking out more against human rights abuses.