Paddy Ashdown, an opposition legislator, said Thursday that he turned down an offer of a post in the Cabinet being formed by Treasury chief Gordon Brown, who will become Britain's prime minister on June 27. 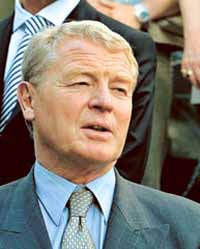 Lord Ashdown told the BBC radio the offer was made on Wednesday after Sir Menzies Campbell, the leader of his Liberal Democrats, said no party members should join Brown's new government.

"It is true that Mr. Brown suggested ... that I might take a position in the Cabinet. I told him that I could not conceivably consider such a position unless my leader told me that he thought it was a good idea and even if he did, I didn't," Ashdown told the British Broadcasting Corp. radio.

He did not identify the post, but Sky News television said Brown, who is replacing Prime Minister Tony Blair as leader of the Labour Party, said it was secretary of state for Northern Ireland.

There has been long-running speculation that Ashdown and Campbell were close to joining Blair's first Cabinet when he came to power in 1997. Several years ago, Ashdown served as top representative of the international community in Bosnia Herzegovina.

Phil Willis, a senior Liberal Democrat legislator, said Brown made Ashdown the offer in an effort to divide and weaken his opposition party, the second-largest in Britain behind the Conservatives.

"I think Mr. Brown's up to mischief-making," Willis told BBC radio. "On one hand, I think he would very much like to see a separation of any interests between the Conservatives and the Liberal Democrats. But we are an independent party. We've made that absolutely clear, he said.

Willis praised Campbell for telling Brown "we are so fundamentally opposed to many of the things that the Labour government are doing that we could not possibly accept such an offer."