It was a caper that Bart would have loved to pull off. 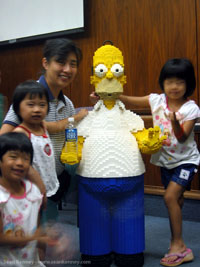 Two men believed to be over-exuberant fans of "The Simpsons" stole a life-sized figurine of Homer Simpson from a Malaysian cinema, more than a month before the premiere of the big-screen version of the U.S. TV cartoon series, a studio official said Thursday.

Police are investigating the theft, but 20th Century Fox is offering a reward of 1,000 ringgit (US$285; euro212) to anyone who provides information leading to the fiberglass statue's discovery, said Moo Hon Mei, the studio's senior marketing director in Malaysia.

The 1.2-meter-tall (4-feet-tall) figurine of Homer holding a TV remote control was part of a promotional display that included the rest of the Simpson family - Marge, Bart, Lisa and Maggie - sitting on a couch at the Golden Screen Cinemas lobby in 1 Utama, a popular suburban shopping mall near Kuala Lumpur, Malaysia's largest city.

Cinema employees discovered Homer had vanished when they arrived for work Monday morning, Moo said. Closed-circuit security cameras showed that two unidentified men carried the statue out at about 3 a.m. and took it to the mall's parking lot, where they put Homer in the boot of their car and sped away. The theft took only three minutes, Moo said.

"We suspect they are passionate fans who want to own a piece of 'The Simpsons' before the movie opens," Moo said. "Homer Simpson is a significant icon, but this theft is a crime. If they really had to have the figurine, they should have made a proper request."

The figurine costs 3,000 ringgit (US$860; euro 640) and was flown in from the United States, Moo said. The other Simpsons remain on display, but it was not immediately clear whether the mall has taken any extra security to curb further disappearances, she added.

District police officials handling the case could not immediately be reached for comment.

"The Simpsons Movie" starts showing in Malaysia on July 26, one day before its U.S. theatrical opening.