Hungary sends hundreds of tons of garbage back to Germany

Hungary began sending hundreds of tons of garbage that was illegally dumped in the country back to Germany. 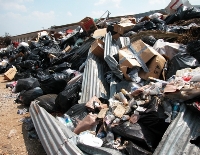 Hungary sends hundreds of tons of garbage back to Germany

Half of the waste some 2,000 tons will be sent back to Germany by the end of August, the Environmental Ministry said in a statement.

Wednesday's shipment was destined for a waste incinerator in Premnitz, west of Berlin.

Last year, Hungarian officials discovered that 4,100 tons of garbage was illegally dumped in southern Hungary and suspected a foreign company. Investigators traced the waste to a business in Germany.

About 3,200 tons of the garbage is said to be from the state of Baden-Wuerttemberg, the rest from neighboring Bavaria, the ministry said.

It was unclear who would pay for the rest of the return shipments, the ministry said, adding that it planned to tighten laws that allow the import of foreign waste.

Hungary and Germany are European Union members, and there are no inspections at border crossings within the EU.