Police in the Philippine capital, jittery over recent bus bombings, were called in to check a bag that was left on a bus - only to find a crying month-old baby stuffed inside, a radio report said Tuesday. 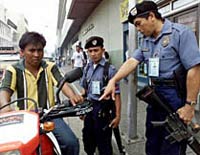 The bag was stashed under a seat and was opened barely enough for the baby boy to breathe during the one-hour bus trip, Radio DZBB reported.

The bus conductor found the bag late Monday and immediately called police in suburban Pasay City, the radio said. The abandoned baby, crying and hungry, was handed over to the Department of Social Welfare.

Authorities are on alert for bus bombings after two blasts in the southern Philippines killed eight people and wounded 14 others on Friday. Police suspected extortion but did not rule out the possibility that the culprits could have links to al-Qaida-linked terror groups responsible for other bombings in the country.