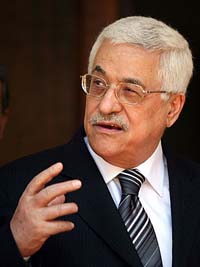 "President Abbas told Mr. Bush that this is the time to resume the political negotiations and to revive the hope of the Palestinian people,' Abu Rdeneh said.

He said Bush affirmed his support for Abbas' policies and the measures he's taken.

Since the Islamic group seized control of Gaza, Abbas has dismantled the coalition government of his Fatah movement and Hamas, and installed a new government led by a political independent, Salam Fayyad.

The European Union announced on Monday that it would lift punishing sanctions on the Palestinian Authority, imposed after Hamas swept Palestinian parliamentary elections in January 2006. The U.S. and Israel have indicated they might follow suit.