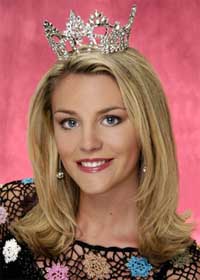 Nelson, 20, will join officials from Symantec Corp. as a tractor-trailer containing the latest in digital technology travels to stores, camps and universities across the United States, trying to bring together parents with little Internet familiarity and their cyber-savvy children.

"Hopefully we can help close that gap and create a dialogue with kids and parents about Internet safety," Nelson said.

Nelson made Internet safety her platform issue, prompted in part by an experience she and two of her friends had with a stranger they encountered on the Internet when they were about 13.

"We were chatting innocently on the computer when we were approached by an older gentleman," the beauty queen said. "He later sent inappropriate pictures of himself, and that's when we alerted our parents.

"If it was a problem seven years ago, it's an even bigger problem now."

In April, Nelson helped investigators in New York state with an undercover sex sting. Eleven men were arrested after Nelson created an online profile of a 14-year-old girl that included photographs of her as a teenager.

"Doing the sting operation really opened my eyes to the way these predators work," Nelson said. "They can be any age, look any way and have any background."

While parents may fear the prospect of their children being approached by a stranger on the Internet or lured away to a face-to-face meeting, a much more common danger for children on the Internet is cyberbullying, said Marian Merritt, an Internet safety advocate for Symantec.

Merritt described cyberbullying as using the Internet or digital technology to harass someone by posting things like hurtful comments, misrepresentations or unflattering photos. With the growing popularity of social networking sites like MySpace, surveys show more than 40 percent of teens have experienced some form of cyberbullying in the last year, Merritt said.

"These things can be incredibly damaging, especially to a young child," she said. "An adult can have a hard time, but for a kid it can be even worse."