Sony Corp. on Friday apologized for a violent computer game featuring a bloody shootout inside an Anglican cathedral. 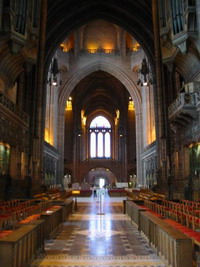 The church had demanded withdrawal of the game "Resistance: Fall of Man", which includes a gun battle between an American soldier and aliens inside a building that resembles Manchester Cathedral in northwest England.

The cathedral's dean, the Very Rev. Rogers Govender, said he had received a letter from Sony on Friday afternoon.

"It was not our intention to cause offense by using a representation of Manchester Cathedral in chapter eight of the work," the letter said. "If we have done so, we sincerely apologize."

A Sony spokesman confirmed the letter was genuine and said it included the offer of a meeting between Sony representatives and church officials. Govender said the cathedral would accept the offer of a meeting. He thanked Sony for the apology, but underlined the church's opposition to violence, "and especially the gun violence seen in this portrayal of the cathedral."

He said the church wanted to discuss its outstanding demands, which include withdrawal of the game and a donation to the church's education department, which works to fight gun violence in Manchester.

Earlier this week, the church called for the people of Japan to join in a campaign against the game, which was manufactured for Sony's new PlayStation 3 console.

"For a global manufacturer to recreate the interior of any religious building such as a mosque, synagogue, or in this case, a cathedral, with photo realistic quality and then encourage people to have gun battles in the building is beyond belief and in our view highly irresponsible," Govender said Wednesday.

The row even drew in Prime Minister Tony Blair, who told lawmakers on Wednesday that companies like Sony should focus on their wider social responsibilities and not just profit. The church was particularly concerned because Manchester has a history of gang-related gun violence.

In its letter, Sony said it did not accept "that there is any connection between contemporary issues in 21st-century Manchester and the work of science fiction in which a fictitious 1950s Britain is under attack by aliens."

"We believe a comprehensive viewing of the work will make its content and context clear." Sony said "Resistance: Fall of Man" - a Sony original - has sold more than 2 million units around the world.