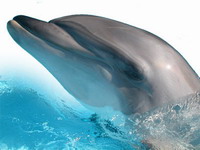 The male infant is being transported to a National Marine Fisheries laboratory for a necropsy to be conducted, said Robert Lingenfelser, president of the Marine Mammal Conservancy.

"About 9 p.m. last night, we noticed the infant was showing signs of distress," said Lingenfelser. "Its breathing was labored and it was struggling to swim."

Lingenfelser said veterinarians and volunteers stayed with the calf through the night helping it to swim as well as nursing and administering drugs.

"Everything that could have been done was done," Lingenfelser said. "There is a profound sense of sadness here."

The infant was born Monday to the dolphin named Castaway.

Castaway originally stranded off Vero Beach in November, but was initially deemed healthy enough for release, after convalescing for more than two months at the Mote Marine Laboratory in Sarasota.

But instead of swimming offshore, it returned to the beach three times and then was transported to the Keys. Subsequently, Castaway was diagnosed to be deaf.

Lingenfelser said that Castaway appears to be in good condition, but that veterinarians had drawn blood for testing to verify the mammal's health.