Kellogg Co. will increase the nutritional value of the cereals and snacks for children or else stop marketing those products to them altogether. 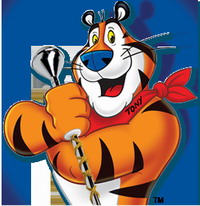 Company brands such as Froot Loops cereal and Pop-Tarts toaster pastries that fall outside certain standards will either be reformulated or dropped from advertising that reaches audiences where at least half of the people are under age 12.

The change comes after parents and advocacy groups worried about child obesity threatened a lawsuit.

A third of the cereals that Kellogg markets to children in the U.S. fall outside those standards, said Mark Baynes, chief marketing officer. Most cereals fall inside the calorie guideline, he said, but meeting the sugar and sodium standards could be the most challenging.

David Mackay, Kellogg's president and chief executive, said the company was taking action because of increasing concerns about marketing to children. Twenty-seven percent of Kellogg's U.S. advertising spending is directed to children under 12.

The more nutritional food will be sold throughout the world, Mackay said.

The company also plans to make immediate changes to its Web sites for children, including automatic screen time limits and information about healthy lifestyles and nutrition. It also said it will limit images of foods in computer games, downloads and wallpaper that don't meet the new criteria.

Kellogg also is adding nutritional information to the front of its cereal boxes in North America. The summary "Guideline Daily Amounts" is designed to provide a snapshot of how the food fits into a proper diet.

As time passes and eating habits change, Kellogg will continue to evaluate and adjust its products "in a way that meets consumers' needs without sacrificing taste," he said.

Mackay pointed out that W.K. Kellogg founded his cereal company in 1906 with a focus on health and nutrition.

"We believe the initiatives we've shared with you today are a meaningful step in the right direction and build upon our hundred-year heritage," he said.

The announcement of the changes pleased the head of an advocacy group that had joined with others in early 2006 to seek legal action against Kellogg.

"Kellogg has vaulted over the rest of the food industry," said Michael F. Jacobson, executive director of the Center for Science in the Public Interest.

General Mills has had its own guidelines for marketing and advertising for years, and two years ago adopted specific nutrition criteria for marketing to children. The guidelines are similar to those adopted by Kellogg and, on some points, stronger, he said.