Independent weekly Feral Tribune claimed its next issue will not be printed due to financial problems. 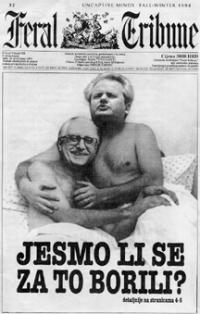 Viktor Ivancic, the editor-in-chief of the privately owned weekly said the paper was unable to cover its debt for value-added tax, totaling 1 million kuna (EUR136,000; US$181,000).

It would be the first time the paper had not appeared in its 14-year history, Ivancic said.

Croatia has a flat 22-percent VAT rate on all goods and services. Media experts have long insisted that privately owned newspapers' meager profits cannot cover it.

Because of its fearless investigative journalism and harsh criticism of all Croatian government officials, especially former nationalists, Feral Tribune has become a symbol of the free press among many in Croatia. But that also made it hated by others, and companies have refused to advertise in the paper, Ivancic said.

"Our problems mounted, we're not capable of overcoming them," he said. "We will do everything in our power for Feral Tribune to continue being published, but I cannot tell you when or if it will happen."

The new issue had been due to come out on Friday.

Several lawmakers on Thursday asked the government to postpone or cancel Feral Tribune's debt payment, claiming it had done so in the past for a state-owned daily and for the state-owned television.

Also Thursday, a U.S.-based human rights group, Freedom House, judged Croatia as "partially free" in democratic standards, giving it a 3.7 score in 1 (best) to 10 (worst) rating of countries around the globe.

Independent media was one of the seven categories reviewed, and Freedom House criticized Croatia for "continued concentration and commercialization of print media ... (which) weakened the overall level of media professionalism and investigative journalism."

It said the government continued to hold "political influence over media outlets."