An Italian military court has allowed a former Nazi officer convicted for his role in a 1944 massacre to leave house arrest to work - a ruling that sparked outrage among the families of those murdered, politicians and Jewish groups. 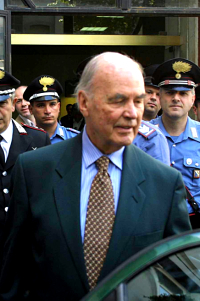 Since last month, 93-year-old Erich Priebke has been allowed to leave the Rome apartment where he is serving a life sentence to work as a translator at his lawyer's office in the Italian capital, lawyer Paolo Giachini said Wednesday.

Priebke has been in prison or house arrest since he was extradited to Italy in 1994 from Argentina. He was convicted of war crimes three years later for his role in the massacre of 335 civilians at the Ardeatine Caves on the outskirts of Rome.

Priebke has admitted shooting two people and helping round up the victims, but has always insisted he was just following orders and should not be held responsible.

Giachini said Priebke was working as a translator thanks to his knowledge of German, Italian, Spanish and English. Speaking from his office, the lawyer told The Associated Press by telephone that his client only came to the law firm "when necessary" and declined to say whether Priebke was there Wednesday.

Giachini maintained the judges "could not refuse this request" because Italian law affords such benefits to all convicts after 10 years in jail if they have been on good behavior. But news of the ruling created a storm because of the heinous nature of the crime.

Efraim Zuroff, director of the Israel office of the Simon Wiesenthal Center, said the Italian ruling "insults the family and friends of those murdered by Priebke and his cohorts."

"The passage of time in no way diminishes the guilt of Holocaust perpetrators and people like him, who had no mercy for their victims, do not deserve any sympathy themselves," he said in a statement.

Rome Mayor Walter Veltroni expressed solidarity with angered families of those killed in the massacre. Massimo Rendina, the head of a group of former Italian resistance fighters in World War II, told the daily Corriere della Sera that his association and the relatives were considering appealing against the ruling.

The executions at the caves occurred March 24, 1944, 24 hours after a partisan attack in central Rome that killed 33 members of a Nazi military police unit. Nazi forces decided to kill 10 Italians for every slain German. They raided prisons for dozens of political prisoners, taking 75 Jews and adding common criminals and residents from near the site of the partisan attack.

They rounded up five more men than the 330 they sought and killed them all in the abandoned quarry outside Rome.

"A man of 93 who gets a job at a law firm? It's absurd, it's a way to get around his sentence," Amos Luzzatto, a former head of Italy's Jewish communities, told Corriere. "I hope that Priebke will not take advantage of this to organize an escape."