Babysitter gets reprieve of execution

Cathy Lynn Henderson won a reprieve Monday from a divided Texas Court of Criminal Appeals, keeping her from being executed this week for the slaying of a 3-month-old child in her care. 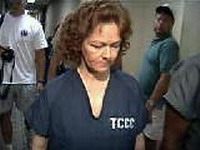 Babysitter gets reprieve of execution

Henderson, 50, was scheduled to be executed Wednesday for the death of Brandon Baugh, whose skull was bashed in while she was baby-sitting him. His body was buried in a wine cooler box as she fled the state more than 13 years ago.

The state's highest criminal court voted 5-3, with one judge not participating, to send the case back to the trial court because of new evidence suggesting that the baby's head injuries could have come from an accidental fall, as Henderson has claimed.

The high court ordered the trial court to examine arguments that Henderson was innocent of capital murder and that constitutional errors led to her conviction.

In an appeal filed late last month, Henderson's lawyers said new scientific evidence bolstered the baby-sitter's contention the child died when she accidentally dropped him and his head struck the concrete floor at her home in an Austin, Texas, suburb.

A medical examiner who testified for the prosecution in 1995 that Brandon's death could not have been an accident submitted an affidavit with Henderson's appeal that he believed scientific tests not available a decade ago now show his conclusion was incorrect.

"Had the new scientific information been available to me in 1995, I would not have been able to testify the way I did," said Dr. Robert Bayardo, the now retired chief medical examiner in Travis County.

Judge Tom Price, in the lone concurring statement, said he thought Bayardo's affidavit proved to him no rational juror could have found Henderson guilty "to a level of confidence beyond a reasonable doubt."

But in a scathing dissent, Judge Michael Keasler chided the judges who backed the reprieve without explanation as "indefensible."

Henderson told the Associated Press in an April interview that she was swinging the infant on Jan. 21, 1994, to try to calm him when she stepped on a toy and lost her balance.

"He flew out of my hands," she said at the state's female death row in Gatesville, Texas.

She said she performed cardiopulmonary resuscitation on the infant but did not call emergency authorities. She wrapped him in his blanket, stuffed him in a wine cooler box and fled north, burying him in a field 60 miles (96 kilometers) away. Then she drove to her native Missouri where she was arrested under an assumed name.

Eighteen days after she and the infant disappeared, Brandon's body was found in a shallow grave.