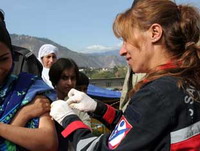 Elsa Serfass, 27, a logistics specialist for Doctors Without Borders, had been traveling from the group's regional base in the African country as part of an "exploratory mission" of the health conditions in the town of N'Gaoundal, the Paris-based organization said in a statement.

Rebels control much of the area where Serfass was killed, but it was unclear if they were involved in the attack.

Bertin Wafio, one of the leaders of the northwest rebel movement, said he did not know who attacked the woman. He said if it had been one of his fighters, it was someone acting against rebel orders.

"It's truly regrettable that something like this happened in the zone under our control," Wafio said. He said he was sending representatives to the site to investigate the incident.

French President Nicolas Sarkozy condemned the killing, and called on the African country's authorities "to do everything so that those behind this cowardly and odious crime don't go unpunished," according to a statement.

Doctors Without Borders - or Medecins Sans Frontieres in French - said the killing was a "shock" for the group.

The aid group said health conditions are "catastrophic" in N'Gaoundal. The town has been a site of fighting between rebels and government forces that has uprooted as many as 280,000 people, according to figures from the United Nations and the international Red Cross.

Jean-Sebastien Munie, head of the U.N.'s office for the Coordination of Humanitarian Affairs in the country, said the United Nations had suspended operations in the area and planned to meet with aid groups Tuesday morning to determine what steps to take further.

Central African Republic has suffered decades of army revolts, coups and rebellions since it gained independence from France in 1960. In the past year, the country has been roiled by low-level rebellions along the eastern border with Chad and Sudan, and separately in the northwest. The groups sometimes claim allegiance to each other, but often appear to be acting independently.

Poor and landlocked, the nation of 3.6 million is governed by President Francois Bozize.