International community has to coordinate efforts to prevent nuclear terrorism

U.S. Attorney General Alberto Gonzales said at an anti-terrorism conference in Mamithe that international community must communicate and coordinate efforts to stop terrorists who may be seeking nuclear weapons. 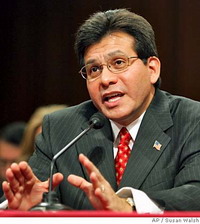 International community has to coordinate efforts to prevent nuclear terrorism

"This is a mission we must accept and will not fail," Gonzales said in a speech at the Global Initiative to Combat Nuclear Terrorism Law Enforcement Conference, which was attended by the world's nuclear powers and delegates from 28 countries.

The delegates are meeting for five days to exchange information and cooperation on battling nuclear terrorism. The initiative aims to provide guidelines for keeping track of atomic substances to ensure the safety of nuclear facilities and combat trafficking of materials that could be used in bombs.

"The threat of nuclear terrorism is all too real. We know, for example, that al-Qaida has been trying to acquire or make nuclear weapons for over 10 years," Gonzales said.

Gonzales also said the Justice Department is preparing an initiative to improve detection, investigations and prosecution of people and companies who violate U.S. export laws on materials that can be used to make nuclear weapons.

Meanwhile, FBI Director Robert Mueller told the participants that prevention is key. He said the intelligence alone is not enough and that in order to discover information about potential plots or trafficking, agencies must be able to move quickly and together.

"No one person, no one officer, no one agency and no one country can prevent a nuclear terrorist attack on its own. There are too many unlocked doors and unknown players, too many ports and porous borders."