Only his health prevented Oscar Peterson from traveling from his home near Toronto to attend the tribute concert featuring Wynton Marsalis and other jazz stars at Carnegie Hall - where the legendary jazz pianist started his international career nearly 60 years ago. 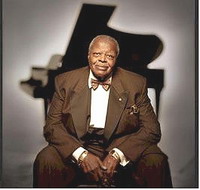 "Even though he can't be here this evening and is quite disappointed about that, he sends his heartfelt thanks, his deepest appreciation and his love to all of you," Peterson's wife, Kelly, told the audience at the Fujitsu Jazz Festival concert Friday night honoring the 81-year-old "Master of Swing."

Peterson's daughter, Celine, recalled that it was on the same stage that her father's "amazing career began."

In 1949, jazz impresario Norman Granz invited a then-unknown pianist he had heard performing in a Montreal club to come to New York for one of his Jazz at the Philharmonic concerts at Carnegie Hall. Peterson was brought up from the audience as a surprise guest to play a duet with bassist Ray Brown, overwhelming everyone with his dazzling technique and mastery of different jazz styles.

Pat Philips, who produced the Friday night tribute with her partner Ettore Strata, came up with the idea after hearing Peterson in a rare club performance at New York's Birdland a year-and-a-half ago. Peterson, who lives in Mississauga, Ontario, has cut back his touring schedule in recent years due to arthritis and a mild stroke he suffered in 1993 that affected his left hand.

"I wondered why there hadn't been a recent or important tribute to Oscar Peterson in the United States, and I was sort of astounded that I couldn't find anything," Philips said in an interview. "This is where it all started for him ... and I thought it important that America pay tribute to him because he's been such an inspiration to all the great jazz pianists here and all over the world."

Peterson's fellow octogenarians, though frail, provided some of the evening's most moving moments. Eighty-eight-year-old Hank Jones, whom Peterson described as his favorite pianist, accompanied 86-year-old Clark Terry, who charmed the audience with his vocalese on "Mumbles" - reprising a tune the trumpeter recorded with Peterson in 1964.

Terry then performed a touching version of the ballad "The Nearness of You" with the 87-year-old pianist Marian McPartland, another longtime Peterson friend.

Gypsy violinist Florin Niculescu flew in from Paris to play "Someone to Watch Over Me," evoking memories of Peterson's recordings with the French swing violinist Stephane Grappelli.

Peterson's own compositions were showcased throughout the evening - most notably several movements from his 1964 "Canadiana Suite," which he wrote to express his pride in his native country. The 20-year-old piano sensation Eldar, who was inspired by Peterson recordings growing up in Kyrgyzstan, set a blistering tempo on "Place St. Henri," named for the Montreal district where Peterson grew up; while Canadian pianist Renee Rosnes created a more pastoral mood on "Ballad to the East" about the Maritime Provinces.

"It really is nice to be able to pay tribute to someone who's alive, and Oscar is very much alive," the 85-year-old pianist Billy Taylor told the audience."He couldn't be here with us tonight but he's here and his music is still happening."

It was left to Peterson himself to provide the evening's final coda. As the performers lined up on stage with Kellaway holding aloft a large color photograph of the pianist, the audience exited to the sounds of a 1950s recording of the Oscar Peterson Trio playing "(Back Home Again In) Indiana" at breakneck tempo.