Charges against Marine officer to be dismissed

Charges against a Marine officer accused of failing to investigate the killings of 24 Iraqi civilians in the town of Haditha should be dismissed. 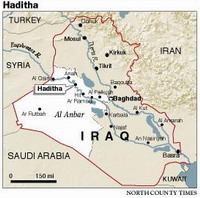 Charges against Marine officer to be dismissed

Capt. Randy W. Stone, 34, is one of four officers accused of failing to report and investigate the deaths of the men, women and children in a deadly sweep on a chaotic day of battle in the village.

His attorney, Charles Gittins, said Saturday that investigating officer Maj. Thomas McCann concluded in a report to the commanding general overseeing the case that Stone should not face trial and the matter should be handled administratively.

The recommendation is non-binding. A final decision will be made by Lt. Gen. James Mattis, the commanding general overseeing the case.

Stone faces up to 2 1/2 years in prison and dismissal if his case goes to trial and he is convicted.

Also on Saturday, one of Stone's fellow officers, Lt Col. Jeffrey Chessani told the officer overseeing his hearing that he believes he broke no laws.

"Hindsight is 20/20," Chessani told Col. Christopher Conlin. "I did not believe that my actions and my decisions were criminal, sir."

Chessani, 43, is the most senior Marine of seven charged in the case, and the highest-ranking Marine officer charged since the start of the Iraq war. He faces up to three years in prison if convicted.

His statement came during his Article 32 hearing. An investigating officer will determine at the conclusion of the hearings whether Chessani will stand trial on charges of dereliction of duty and violating a lawful order for failing to investigate the deaths.

Chessani and Stone are among four officers charged with dereliction of duty. Three enlisted Marines are charged with murder. All belonged to the Camp Pendleton-based 3rd Battalion, 1st Marine Regiment.

At Stone's preliminary hearing last month at Camp Pendleton, he argued that he never ordered an investigation into the killings because he believed the deaths resulted from lawful combat.

"I have never lied and have worked at all times to assist as best I could to shed light on what I knew and when I knew it," Stone said at his hearing.