A powerful floating radar that will be part of the U.S. national missile defense system will return to Hawaii this month for maintenance and upgrades. 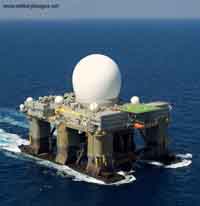 BAE Shipyards at Pearl Harbor won a contract for the X-Band radar, the Missile Defense Agency said Thursday. The radar, which has a home port in Alaska, could be at the shipyard for several months.

The radar became a familiar sight on Oahu last year when it stopped in Hawaii for repairs and maintenance on its way to Alaska from the mainland.

The radar then had to return to Pearl Harbor for repairs after setting sail for Alaska after water leaked through its ballast piping. The problem affected the radar platform's ability to partially submerge and re-emerge from the water.

The US$815 million (euro610.53 million) military apparatus, a converted oil drilling rig topped by a giant white globe, rises some 28 stories from its keel to the top of the radar dome.

It is part of a planned missile defense network the U.S. military is rolling out in the Pacific Rim. The X-band radar is so powerful it can identify baseball-size objects from thousands of miles (kilometers) away and is designed to differentiate between decoys and real missile warheads.

The radar may head out to sea during its stay in Hawaii to participate in a test of the ground base missile defense system but would return to Pearl Harbor to complete its scheduled work.

Its home port is Adak, a former naval station about 1,200 miles (1,931 kilometers) southwest of Anchorage. About 75 crew members are stationed there with the radar.