Sarkozy's mandate for change at stake in French parliamentary election 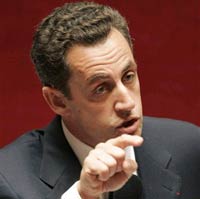 Sarkozy's mandate for change at stake in French parliamentary election

The vote is crucial to Sarkozy's bold reform program, because the composition of his Cabinet and its ability to push through legislation is tied to the number of seats the mainstream right has in the 577-seat National Assembly.

The balloting Sunday is the first round. In France's complex electoral calculus, only candidates who win a majority of votes Sunday land a seat immediately. In races with no majority winner, any hopeful who gets more than 12.5 percent will qualify for the decisive second round June 17.

Sarkozy wants to shake up a country down on its economic fortunes, through slashing taxes and payroll fees, making it easier for companies to hire and fire, and cutting the number of public sector workers.

Labor unions and student groups are wary, and are ready to mount strikes and protests if they deem that Sarkozy wants to go too far in trying to trim France's welfare state protections.

The bigger the victory for conservatives, the stronger Sarkozy's mandate will be - and the stronger his advantage in talks with opponents for his reforms.

Conservatives want to capitalize on momentum from Sarkozy's 53 percent-47 percent victory over Socialist Segolene Royal in the May 6 presidential election. Turnout this weekend is expected to be less than the 84 percent in the presidential contest.

Since then, the congenitally energetic Sarkozy has cast himself as a busybody - certainly compared to former President Jacques Chirac's slower pace - and has drawn plaudits for getting straight to work.

At a legislative campaign stop, Sarkozy called on the French in northern Le Havre to "renew their trust" so he could "keep the commitments" made in the presidential race.

Sarkozy has already met with labor union leaders to discuss his labor reform plans, launched plans for an environmental conference later this year, and jetted to Brussels, Madrid and to Germany twice.

Largely because of that activism, polls suggest conservatives have even more support now than at Sarkozy's defeat of Royal. The Socialist who would have been France's first woman president, has been stumping for her party comrades for the legislative race, but is not running herself.

The Socialists are primarily trying to limit the damage - and hang on to as many of their 149 seats as possible.

Face-saving - and even financial survival - are the stakes for smaller parties like the Communists, whom polls show are likely to garner only a handful of seats, and supporters of Francois Bayrou's new centrist party known as the Democratic Movement.

"It's going to be nasty," Bayrou admitted recently. It appeared unlikely that the 7.8 million voters who hoisted him to a respectable third place in the first-round presidential vote would back his candidates Sunday.

Prime Minister Francois Fillon himself is up for parliamentary election - as are 11 of the government's 15 ministers. Fillon has set an unwritten rule that anyone who loses a parliamentary bid must quit the Cabinet. Only Environment Minister Alain Juppe appears to face a threat in his constituency.

A break with the past appears in store. There has been left-right alternation in parliamentary control in every legislative election since 1978. But this time, conservatives look set to be renewed.