Protesters converge on Rome for demonstrations against Bush visit

Anti-globalization and far-left activists from across Italy were converging on the capital Saturday to protest against U.S. President George W. Bush during his visit to Rome and the Vatican. 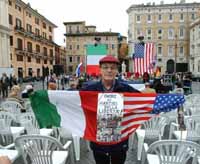 Protesters converge on Rome for demonstrations against Bush visit

Thousands of police were swarming around the Colosseum, the downtown Piazza Venezia and other venues amid fears some protests could turn violent as Bush meets the pope and Italian officials.

At Milan's railway station, police in anti-riot gear flanked the tracks and monitored demonstrators boarding trains to Rome. Groups of 100-200 protesters were blocking tracks at stations in Milan, Venice and Padua trying to board trains without tickets, news agency ANSA reported.

Two main demonstrations, each expected to draw thousands of protesters, are planned for the afternoon in Rome. The U.S. Embassy on Friday issued a warning to Americans to avoid the demonstrations or risk "becoming targets of opportunity."

One protest by anti-globalization and anti-war groups will pass through much of downtown Rome and end up at Piazza Navona, the picturesque piazza famed for its Bernini fountain.

Security officials have warned that protesters who have their faces covered, or are carrying sticks or weapons, would be barred from taking part. Three people were detained as they were headed for the demonstration in a trailer carrying wooden sticks and fire-extinguishers, ANSA reported.

A second demonstration, to be held at the central Piazza del Popolo, is expected to draw radical leftist politicians from Premier Romano Prodi's coalition. The premier has asked Cabinet ministers not to join, but lawmakers and leaders from Communist and other extreme-left parties said they would attend. The protest will feature music and speeches protesting U.S. policies.

Protesters will be taking aim at local and global issues, including the wars in Iraq and Afghanistan, as well as Italy's participation in the latter. Also targeted will be Bush's environmental policies and the planned expansion of a U.S. military base in the northeastern city of Vicenza.