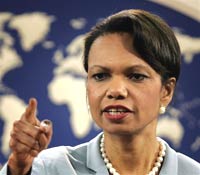 "History's judgment is rarely the same as today's headlines," she said Friday in an interview with The Associated Press.

Rice said she believed the world was more dangerous before Bush took office in January 2001 than it is now.

"Six years ago ... it wasn't a very nice world. Al-Qaida was preparing to attack the twin towers, Pakistan was allied with the Taliban, Afghanistan was the base from where al-Qaida was going to operate, the Israelis and Palestinians had given up," she said.

"The Palestinians had walked away from a chance for a Palestinian state, launched the second intifada; (Israel) elected Ariel Sharon who basically said there will never be a Palestinian state and there will be a greater Israel; the North Koreans were cheating on a deal that they had just signed; China and others were indifferent; Iran was cheating on the IAEA out of sight and Saddam Hussein was shooting at our pilots in the no-fly zone and making a mockery of the oil-for-food program and corruption was running rampant in that program."

"That was the world. A worse world? I think so."

"I think that what this president has done is ... to set up the long struggle that we are going to have to resolve particularly the problem of the growth of extremism in the Middle East, which was clearly there underneath the surface and exploded on Sept. 11."

Asked how long it would take for the Bush administration's initiatives to succeed, Rice counseled patience.

"I think there is a lot of progress," she said. "Now, will we see the end of all this? Maybe not. But when you are confronted with a fundamentally changed strategic set of circumstances, you can try to put Band-Aids on it, or you can say we are going to have to deal with the root problems here and it may take a long time."