The space shuttle Atlantis, fresh from a fiery and nearly flawless launch, was in hot pursuit of the international space station on Saturday, but will not catch up until Sunday. 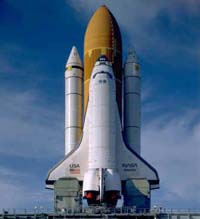 Atlantis' seven-man crew was closing the gap between the two space bodies by 920 miles every 90-minute orbit. By 1300 GMT, the shuttle was scheduled to be 8,630 miles (13,888 kilometers) away from its destination. Atlantis was to dock with the space station Sunday afternoon.

During the 11-day flight, the astronauts will deliver a new segment and a pair of solar panels to the orbiting outpost. They plan three spacewalks - on Monday, Wednesday and Friday - to install the new equipment and retract an old solar panel.

On Sunday, astronaut Clayton Anderson will replace astronaut Sunita Williams as the U.S. representative aboard the space station, and Williams will return to Earth aboard Atlantis. She has spent the past six months in orbit.

Much of Saturday's work was designed to set the stage for Sunday's docking and the tasks that follow. Astronauts were also going to check if the shuttle was damaged from foam debris shaken loose during Friday night's launch. It was a foam hit that caused Columbia's fatal accident in 2003; since then, NASA spends its first full day in orbit looking for potential problem spots.

About an hour after launch, NASA managers said initial checks found nothing to worry about. One piece of foam that appeared to come off the shuttle's fuel tank - which bore ugly white patches that repaired hail damage that had delayed the flight by three months - about 135 seconds after launch did not seem to hit the shuttle, said shuttle program manager Wayne Hale.

"The tank performed in a magnificent way, despite having several thousand repairs to it," Hale said at a news conference. "(The debris) should not be a hazard that late in the flight."

Astronaut Patrick Forrester will use the shuttle's robot arm and a boom extension to examine its delicate wings and outer edges.

Minutes after launch, Atlantis' contrails formed an intricate and unusual knot in the Florida sky, framed by the colors of sunset and with the bright light of Venus peeking through.

Veteran shuttle watchers oohed and aahed at the second sky show of the night.

The first shuttle launch of the year helped put NASA back on track after a run of bad luck and scandal on the ground through the first half of the year.

In the past few months, NASA has seen the arrest of astronaut Lisa Nowak in an alleged plot to kidnap her rival for a shuttle pilot's affections; a murder-suicide at the Johnson Space Center in Houston; and the derailment of a train carrying rocket-booster segments for future shuttle launches.

More recently, NASA Administrator Michael Griffin has come under fire for suggesting that global warming may not be a problem worth wrestling with. And the agency's inspector general was lambasted at a congressional hearing Thursday by former staff members, congressmen and senators over the way he managed his office, treated his employees and investigated complaints.