What do you get when you mix Picasso with Bollywood? 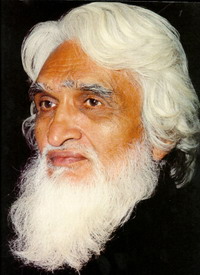 Dozens of art lovers and fans of the Indian silver screen got a chance to find out when one of India's most famous artists, M.F. Husain, and leading movie heartthrob Shah Rukh Khan went live on stage at the Bonham's auction house in London on Thursday to collaborate on a painting that was later sold while it dried.

Husain, named by Forbes magazine as the "Picasso of India" and Khan, the movie star so revered that his fans call him "King Khan," completed the large painting depicting a scene from Mugal-e-Azam, a popular 1963 Indian film about a legendary slave girl named Anarkali. The public display was part of an event called "Art for Freedom" which was meant to raise support for art and media.

The piece features a man in sand-colored clothing fanning the face of his lover, Anarkali, who is reclining near a musician playing a sitar. It was painted almost entirely by Husain before the event - with only the sitar to be completed by Husain and Khan in front of the live audience.

Khan, who knows Husain personally and owns one of his paintings, said that it was an honor to be able to share the canvas with the 92-year-old artist known for never wearing shoes and carrying a paintbrush wherever he goes.

"Whatever we do can be turned into a masterpiece, because he is the master," Khan said.

Khan carefully filled in the bottom portion of the sitar with small nervous strokes, before Husain took the paintbrush away to the amusement of audience members.

Many people who came to the auction had been skeptical about Khan's artistic abilities, including Khan himself, but were curious to see what the collaboration would produce.

"I am not an artist by a long shot, but I'm here to just enjoy the evening as I hope many of you will too," Khan said.

Husain and Khan wrote their signatures in the upper right corner of the piece.

The effort was part of an auction which featured 35 other pieces of artwork completed by India's top artists - many of which were also collaborations with eminent citizens in the Indian and British communities.

Isabel Kocses, a fan of Indian art, traveled from Duesseldorf, Germany in order to see Husain and Khan's painting.

"I am very impressed by Indian painting and learned a lot about it. I came to see Husain, because he is the greatest artist," she said. "I know the collaboration will be amazing."

The painting's sale is being negotiated.