Son of Russia's deputy PM gets 14 months of imprisonment

The son of Russia's deputy prime minister got 14 months in a British jail after an attack on a banker in a drunken brawl. 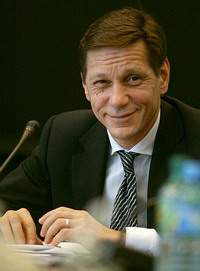 Son of Russia's deputy PM gets 14 months of imprisonment

Petr Zhukov, who works in London as an investment banker, repeatedly struck another banker at a party in an East London apartment, leaving him unconscious and bleeding heavily on July 7, 2006, Judge Nicholas Loraine-Smith said.

The 24-year-old son of Russian Deputy Prime Minister Alexander Zhukov was convicted of unlawful wounding after he joined a melee between his friends and the other banker.

Zhukov's friend, Artjom Dahko, a Latvian bank analyst started the fight because the victim was wearing shoes in the apartment - which he said was an insult in his culture.

The judge said Zhukov tried to stop the attack at first.

"But you, too, very quickly lost your temper and turned ... to aggressor," Loraine-Smith said during a hearing at London's Southwark Crown Court.

The victim eventually regained consciousness, struggled to his feet and staggered into the street. He needed five stitches to his cheek and 20 to his lower lip. He also suffered a crushed cheekbone, two cracked ribs, a swollen jaw, cuts on the back of his head and bruises to his arms, shoulder, chest and legs.

Zhukov was cautioned three weeks before the incident for a drunken attack on a taxi driver - a factor Loraine-Smith said he considered in passing sentence.

In an earlier plea for leniency, Zhukov's lawyer, Clare Montgomery, said her client was "deeply mortified" by the injuries he had helped cause.

She said he was also deeply upset at the damage the "horrendous publicity" about his case in Russia had caused his family.

"In particular, it has caused political repercussions for his father," she said.

Dahko, 27, was sentenced to 12 months on the same charges.

The judge said he would not seek to have the men deported.