Floods caused by Cyclone Gonu stranded dozens of tiny villages in the deserts of southern Iran on Friday, cutting off roads, power and communications and sending some residents into trees for safety. 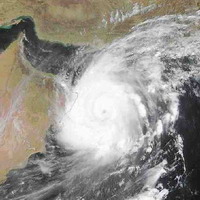 Water encircled more than 100 villages deep in Kerman Province, where many residents subsist on livestock and small farm plots in villages consisting of a handful of families.

Lieutenant Siamak Miladi, a police commander in the town of Kalaganj, said rescue workers were expected to reach many villages by helicopter Saturday.

"Power and telephone lines were affected by the flood there, so we do not have any access to them for the time being," he told The Associated Press in a telephone interview.

Flooding also swamped dozens of villages in neighboring Sistan and Baluchistan province, where the state news agency said some inhabitants had climbed up onto treetops.

The floodwaters drove out the residents of Shahrestan village, near the port city of Chabahar, according to the official Islamic Republic News Agency.

"Some of them are living in trees," villager Slamcq Hood told IRNA. "Since the beginning of the storm on Wednesday we have not received any relief assistance."

The report quoted Ebrahim Hood, another local in the village, as saying that, "Children, old people and women will lose their life if the assistance does not arrive."

State television said the flooding had damaged roads, farms and buildings in that part of the country and relief supplies were being shipped to some remote villages by helicopters.

Video footage showed people taking their belongings to higher ground, and said hundreds were living in tents in the port town of Konarak. It also said regular flights to the town's airport had restarted.

In Bandar Abbas, Iran's main non-oil port, some people were living in school auditoriums, where they moved during the storm, but life otherwise was normal, the report said.

Gonu's rains had sent torrents of water and mud surging through Oman's seaside capital, Muscat, wreaked havoc and cut off the country's easternmost provinces when the cyclone first made landfall Wednesday.

In Muscat, Royal Police spokesman Abdullah al-Harthi said late Friday that the storm's death toll for Oman had risen to 49 killed, with 27 people still listed as missing. However, the country's alert code has been decreased from red to orange, he said.

At the height of the storm in Oman, winds swept up to 95 mph (153 kph), according to the U.S. military's Joint Typhoon Warning Center said. Oman's weather center said that Gonu was believed to be the strongest and deadliest storm to strike Oman since 1977, when 500 people were killed.

The storm spared the region's oil installations, and oil futures fell Friday on a wave of profit-taking that followed a surge in prices a day earlier. News that Cyclone Gonu had spared major oil installations in the Gulf of Oman also alleviated supply concerns.

Light, sweet crude for July delivery fell 62 cents to US$66.31 a barrel in morning trading on the New York Mercantile Exchange after dropping as low as US$65.55 early in the session.

More than 20,000 people were evacuated Wednesday from their homes in Oman and were provided with government dwellings stocked with food, water, medicine and other supplies.