Since the beginning of the year, NASA has gone through an astronaut's arrest in a bizarre love triangle, a workplace murder-suicide and a freak hail storm at the launch pad. 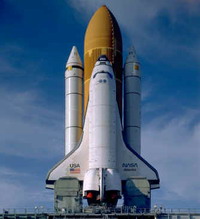 What it has not had is a space shuttle launch.

NASA hoped to change all that with the blastoff of Atlantis at 7:38 p.m. (2338 GMT) Friday on a mission to continue construction of the international space station.

"We've had a tough six months for a number of different reasons," NASA Administrator Michael Griffin told The Associated Press before the launch. "We'd love to have a textbook launch and a textbook mission. It would just make everybody feel good."

Fueling of the huge external tank was finished on schedule shortly before 1 p.m. EDT (1700 GMT), and forecasters predicted an 80 percent chance of good weather at launch time. That is balmier weather than what the space shuttle faced on the launch pad in late February when golf-ball-size hail knocked thousands of pockmarks in the insulating foam of Atlantis' external tank.

Atlantis was moved from the launch pad back to the Vehicle Assembly Building and the original launch date in mid-March was postponed. NASA managers chose to repair the tank rather than swap it out for another, and scores of engineers and technicians worked for two months to remove, sand down and reapply foam to the tank.

Foam on the external tank is of special concern for NASA since the space shuttle Columbia accident in 2003 killed seven astronauts. Investigators pinpointed the accident on a piece of foam that broke off during launch and struck a wing, allowing fiery gases to penetrate the shuttle during its return to Earth.

Atlantis' tank is covered in white splotches where repairs were made, but NASA managers said it is as safe as any other tank.

"We feel we are ready to fly," said LeRoy Cain, launch integration manager.

During the 11-day mission, Atlantis and its seven astronauts will deliver a new segment and a pair of energy-producing solar panels to the international space station.

Astronaut Clay Anderson will replace astronaut Sunita Williams as the U.S. representative at the orbiting outpost.

NASA hopes to fly at least 13 more construction missions to the space station before the space shuttle fleet is grounded in 2010. The space agency also wants to fly a single mission to repair the Hubble Space Telescope, which officials said Thursday would be in September 2008.

As NASA managers praised engineers and technicians who repaired Atlantis' tank, they kept a wary eye on another set of workers at Kennedy Space Center who may strike as early as this weekend.

Last week, almost 570 machinists and aerospace workers at the Kennedy Space Center rejected a contract offer from United Space Alliance, NASA's primary contractor for the space shuttle. Few of the workers who might strike have any direct role in the final preparations for space shuttle launches, and NASA officials have said there are other employees who could fill the roles of striking workers if necessary.

"It's not our intention to stop a shuttle launch," union business representative Johnny Walker said Thursday afternoon. He said the union is considering putting up picket lines, but also arranging to allow union members outside of Kennedy Space Center to keep working on Atlantis' flight.

If the workers did go on strike, it would be yet another twist in a weird year for the space agency. Since the start of the year, NASA has faced:

- A reduction in the 2007 launch schedule from five to four this year because of the hail storm.

- The arrest of astronaut Lisa Nowak on charges she attempted to kidnap a romantic rival for the affections of another astronaut. Nowak and Bill Oefelein were dismissed from the astronaut corps, and Nowak is set to go on trial in September.

- A murder-suicide at the Johnson Space Center.

- The derailment of a train carrying booster segments for future shuttle launches.