A man's attempt to make the Roman Catholic Diocese of Richmond financially liable for his childhood abuse by two priests was rejected by the Virginia Supreme Court. 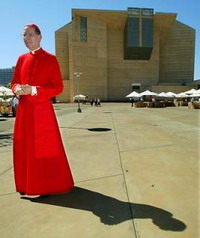 The unanimous decision affirmed a lower court's ruling that only individuals - not their employers - can be sued for child sexual abuse.

Steve Kopalchick of Hopewell, Virginia, sued the diocese for $5 million in 2003. He claimed two priests at Saint James Catholic Church in Hopewell molested him while he served as an altar boy there in the 1960s.

A 1994 state constitutional amendment extended the statute of limitations for child abuse victims to file lawsuits, but also said such civil suits can only be filed against a "natural person." The Supreme Court said the diocese clearly is not a "natural person," which other courts have defined as "a human being."

A sexual abuse lawsuit against an organization is subject to Virginia's long-standing personal injury statute of limitations, which expires two years after the injury is sustained, the court ruled.