Brazilian leaders of one of their country's largest evangelical Christian churches became convicted felons Friday when they pleaded guilty to charges of smuggling more than $56,000 (41,950 EUR) in cash into the United States. 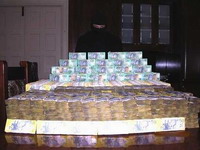 Estevam Hernandes Filho, 53, and 48-year-old Sonia Haddad Moraes Hernandes also are charged in Brazil with stealing millions of dollars from parishioners. They will likely be deported home once their U.S. case is resolved.

The couple - known as Apostle Estevam and Bishop Sonia to their thousands of faithful - pleaded guilty to evading U.S. currency requirements and conspiracy charges at a hearing in Miami federal court.

"Yes, guilty," Hernandes and his wife both said in Portuguese to U.S. District Judge Federico Moreno, according to a court translator.

The charges carry a maximum of 10 years in prison, but the couple would probably get far less time than that under U.S. sentencing guidelines. A maximum fine of $500,000 (374,560 EUR) each also could be imposed by Moreno, who scheduled sentencing for Aug. 17.

The guilty pleas came a few days before trial was scheduled to start next week.

Hernandes tightly hugged his wife, who was fighting back tears, after they entered their pleas, but both refused comment, as did their lawyers. Moreno said the couple would remain under house arrest and electronic monitoring until sentencing at a house they own in a gated neighborhood in Boca Raton.

The couple leads Brazil's Reborn in Christ Church, which they founded in 1986 and which now claims hundreds of thousands of followers and about 1,200 temples in the world's largest Roman Catholic country. The church has temples in Orlando, Deerfield Beach and Boston and their empire also includes newspapers, TV and radio stations, a recording company and the Brazilian patent on the English word "gospel."

But Brazilian authorities say the couple stole parishioners' donations for their own use, including the purchase of mansions and horse farms in Brazil and the United States. Brazil is seeking the couple's extradition from the United States on charges of fraud, larceny, tax evasion and money laundering.

Moreno told the couple they would probably be deported to Brazil after completing whatever sentence they get in the United States. Church officials in Brazil have blamed "religious persecution" for the charges and followers have continued to express support.

The U.S. charges were brought after the couple arrived Jan. 8 at Miami International Airport on a flight from Sao Paulo, Brazil, with $56,467 (42,300 EUR) stashed in their luggage, a son's carry-on backpack, Sonia Hernandes' purse and in a Bible.

Prosecutors say they initially failed to declare on a customs form that they were carrying more than $10,000 (7,490 EUR), then declared under questioning that they actually had about $21,000 (15,730 EUR). A search of their luggage revealed more than twice that, leading to the currency evasion charges.

Under a plea agreement, the couple will forfeit the more than $56,000 (41,950 EUR) they attempted to bring into the United States.