Convicted of killing preacher husband gets 6 years of imprisonment

A woman accused of killing her preacher husband with a shotgun blast never apologized for her crime and slurred her husband's character during the trial. 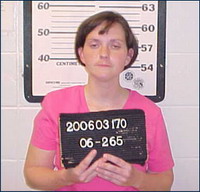 Convicted of killing preacher husband gets 6 years of imprisonment

Mary Winkler, 33, faces a maximum of six years in prison, but her lawyers have asked for a ruling which would keep her out of prison and eventually clear her record of the crime.

If sentenced to prison, Winkler would be eligible for parole after serving 30 percent of her term and get credit for the five months she already spent in jail while awaiting trial.

The preacher's mother, Diane Winkler, spoke directly to Mary Winkler from the witness stand and told her that her three daughters were having nightmares about people with guns breaking into their house.

Mary Winkler went on trial in April on first-degree murder charges, but the jury found her guilty of the lesser crime of manslaughter after she testified she was physically and emotionally abused by her husband, Matthew Winkler.

Mary Winkler testified during her trial that her husband hit and kicked her, forced her to look at pornography and demanded sex she considered unnatural. Jurors were shown a pair of tall, platform shoes and a black wig Winkler said she was pressured to wear during sex.

Those allegations of abuse were untrue, his family testified, and unfair since Matthew Winkler could no longer defend himself.

"The monster that you have painted for the world to see? I don't think that monster existed," Diane Winkler said.

The preacher's family said they never saw any signs of abuse and that Mary Winkler appeared to be a happy member of their family for nine years.

Church members found Matthew Winkler's body and reported his wife and children missing. They were located the following day in Orange Beach, Ala.

Winkler is fighting with her husband's parents for custody of the children, ages 9, 7 and 2.

Mary Winkler's sister, Tabitha Freeman, called her "the best example of a good person I can think of" and asked the judge to give her a chance to be reunited with her children.

"She just needs them. She's not complete without them," Freeman said.