The decision by Superior Court Judge Michael T. Sauer was the latest in a flurry of developments surrounding Hilton's early release from prison. That move sparked protests by many - including local and state authorities and civil rights leaders - who argued it could interpreted as affording the socialite favors not available to other, less famous, inmates. 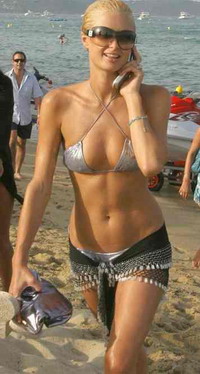 Sauer's decision was announced by court spokesman Allan Parachini shortly before the start of a hearing that could put her behind bars again for violating probation in a reckless driving case.

"Judge Sauer has instructed the Sheriff's Department to go to Ms. Hilton's residence, pick her up and bring her here. That is happening now," Parachini told reporters outside the courthouse.

Hilton on Thursday was originally ordered to report to court at 9 a.m. (1600 GMT) and the judge signed an order for deputies to bring her in a sheriff's vehicle from her home, said Allan Parachini. But early Friday, Parachini had announced that she would be allowed to take part in the hearing by telephone. He said he understood that was her attorney's desire and it was not unusual for phones to be used in misdemeanor cases.

Outside the courthouse, people on other business stopped to gawk at news cameras. One of them was Moses Baltazar who was attempting to clear up his own traffic ticket. He said he was no fan of Hilton, noting she once tipped him only a dollar when he worked as a valet, even though he helped keep paparazzi away from her.

He also said there was no excuse for her flouting the law. "Driving like that, you have to behave. If you're rich, you have money, you have to respect yourself," he said, adding he thinks she should be returned to jail.

The frenzy began early Thursday when sheriff's officials released Hilton because of an undisclosed medical condition and sent her to her Hollywood Hills home under house arrest where she was to serve out the remainder of her 45-day sentence. She had spent three days, and was credited for five.

Hilton was fitted with an electronic monitoring ankle bracelet and was expected to finish the sentence for a reckless driving probation violation at her four-bedroom, three-bath home. In jail, she was expected to serve just 23 days.

The decision by Sheriff Lee Baca to move Hilton chafed prosecutors and Sauer, who spelled out during sentencing that Hilton was not allowed to serve house detention. Late Thursday, Sauer issued the order for Hilton to return to court after the city attorney filed a petition demanding that Hilton be returned to jail and to show cause why Baca should not be held in contempt of court.

Baca does not have to be in court, and it was unclear who would represent the Sheriff's Department.

The move also was met with outrage from the sheriff's deputies union, members of the Los Angeles County Board of Supervisors, civilrights leaders, defense attorneys and others.

"What transpired here is outrageous," county Supervisor Don Knabe told The Associated Press, adding he received more than 400 angry e-mails and hundreds more phone calls from around the country.

Hilton's return home "gives the impression of ... celebrity justice being handed out," he said.

Baca dismissed the criticism, saying the decision was made based on medical advice.

"It isn't wise to keep a person in jail with her problem over an extended period of time and let the problem get worse," Baca told the Los Angeles Times on Thursday.

"My message to those who don't like celebrities is that punishing celebrities more than the average American is not justice," Baca said.

California Attorney General Jerry Brown criticized the Sheriff's Department for letting Hilton out of jail, saying he believed she should serve out her sentence.

"It does hold up the system to ridicule when the powerful and the famous get special treatment," Brown told The Associated Press in an interview before testifying at a congressional hearing in Washington, D.C.

"I'm sure there's a lot of people who've seen their family members go to jail and have various ailments, physical and psychological, that didn't get them released," he said. "I'd say it's time for a course correction."

The Los Angeles County jail system is so overcrowded that attorneys and jail officials have said it is not unusual for nonviolent offenders like Hilton to be released after serving as little as 10 percent of their sentences.

In the hours after Hilton's release, it was a madcap scene outside her house in the hills above the Sunset Strip. As word spread that the 26-year-old poster child for bad celebrity behavior was back home, radio helicopter pilots who normally report on traffic conditions were dispatched to hover over her house and describe it to morning commuters. Paparazzi photographers on the ground quickly assembled outside its gates.

Shortly before noon, Hilton issued a statement through her attorney.

"I want to thank the Los Angeles County Sheriff's Department and staff of the Century Regional Detention Center for treating me fairly and professionally," she said. "I am going to serve the remaining 40 days of my sentence. I have learned a great deal from this ordeal and hope that others have learned from my mistakes."

She pleaded no contest to reckless driving and was sentenced to 36 months' probation, alcohol education and $1,500 (1,124 EUR) in fines.